JLG announced that it is partnering with Italian manufacturer Dieci to bring a new line of rotary telehandlers models to market. The JLG rotating telehandler line will initially consist of three models, the R1370, R1385 and R11100 with max lift heights from 67.3 to 97.1 feet and max lift capacities of 11,000 to 13,200 pounds.

Long popular in Europe, the rotating design works well on narrow city streets or anywhere space is constrained. This feature also enables you to get more work with less repositioning of the machine. The new line of JLG rotary telehandlers will be available with 13 attachments at launch for added versatility. With more than 70% of a machine’s weight composed of steel, Volvo and SSAB intend to reduce the carbon used in its manufacture.Volvo Construction Equipment

Volvo has been pushing the envelope for a decade or more when it comes to environmental improvements to its equipment and operations. Its latest innovation is the first vehicle made with fossil-free steel in Volvo Construction Equipment’s factory in Braås, Sweden.

The steel for the concept vehicle was provided by SSAB, headquartered in Stockholm, with facilities in Finland and the United States. You may recognize one of SSAB’s more well-known products here: Hardox wear plate and Strenx performance steels for dump trucks and other high-abrasion applications. Crowded streets and confined jobsites are no problem for Liebherr’s new MK 73-3.1 crane.Liebherr

“You want that drywall where?” Liebherr’s new crane easily lifts over the gnarliest obstacles

The new MK 73-3.1 crane from Liebherr offers compact dimensions, making it a good choice for projects in densely built areas or where you need to perform multiple lifts to different points on a jobsite without having to reposition. According to the company, setup can be accomplished in as little as 10 minutes.

The smallest of Liebherr’s mobile construction cranes, the MK 73-3.1 measures 45 feet (13.8 meters) long, 8.8 feet (2.7 meters) wide and 13 feet (4 meters) in height, but it also includes all the features of its bigger brother the MK 88-4.1. The new crane can be operated electrically on site or powered by its integrated drive unit. The electric mode is quiet and emissions free, which is desirable in urban environments. A single Cummins six-cylinder diesel engine provides both drive and lifting power. Smart assistance systems and an adjustable elevating cabin support the lifting and positioning of heavy loads. 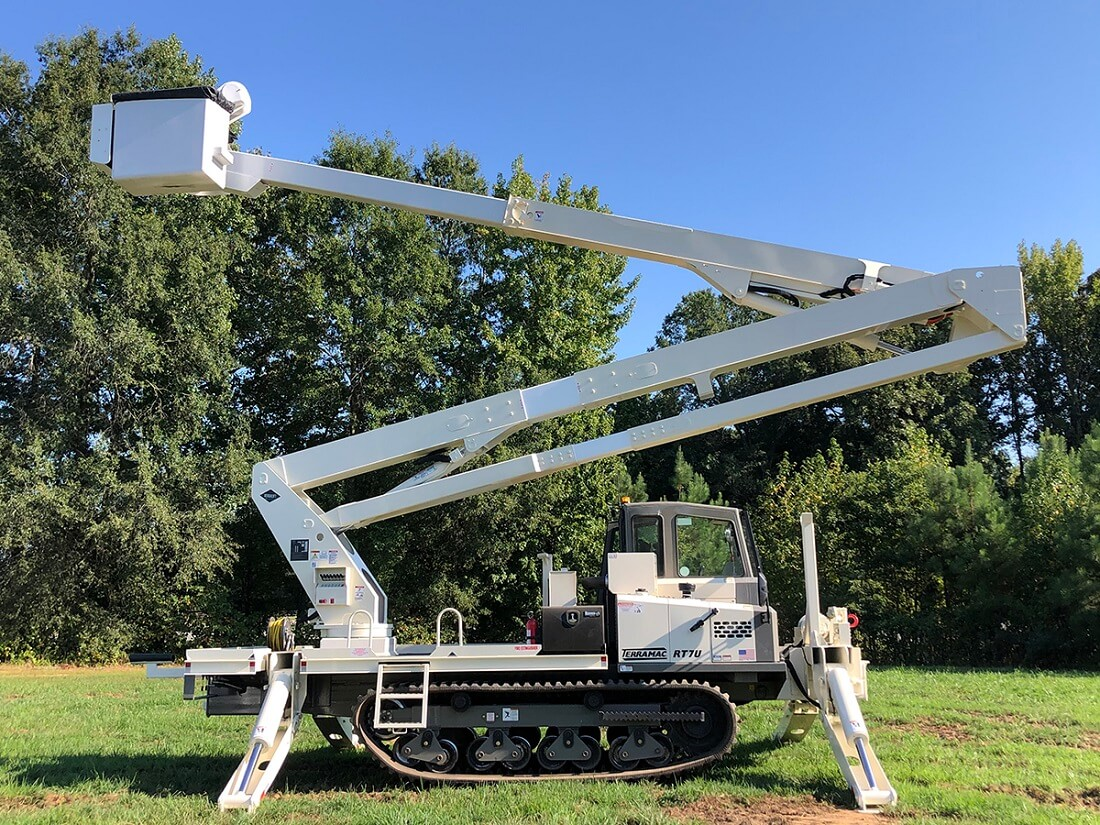 The Terramac RT7U can be customized to meet customers’ needs.Terramac

Customize your crawler carrier from Terramac

Shown at The Utility Expo, the Terramac RT7U is purpose-built for utility applications and capable of accommodating a wide array of support equipment.

The screen can produce up to five products (three aggregates and two sands), the company says. The M1700X is easily transported, has a short 15-minute setup time and has optional hybrid power.

Junttan Oy and Per Aarsleff A/S have formed an alliance to bring the world’s first battery-powered electric pile-driving rig to market.
The PMx2e is modeled after the diesel-powered PMx22. The electric pile-driving rig will offer the same “robust structure and usability as the PMx22 but consumes less energy per pile, reduces noise and delivers more power and instant torque,” Junttan says.
The rig features two detachable 396 kWh battery packs to allow for 8 to 13 hours of continuous pile driving. The battery packs replace the counterweight on the machine and can be charged with a normal 63A mains outlet.
Aarsleff Ground Engineering AB is a Swedish subsidiary of the Danish construction company Per Aarsleff A/S and is one of Sweden’s leading companies in ground engineering. The goal between the manufacturer and end user is to create more environmentally friendly construction sites through the reduction of carbon dioxide emissions that originate from fossil fuels.
Junttan Also Signs Dealer Agreement with XCMG for Foundation Drilling Rigs
Junttan USA Inc., a subsidiary of Junttan Oy, will represent XCMG foundation drilling rigs in the United States.
The rigs, custom-built by XCMG for Junttan, will be backed by a full line of drilling tools, temporary casings, shoes, drive adapters and teeth. The XCMG line of drilling rigs has a range of operating weights from 45 to 200 tons and torque values between 130 and 800 kNm. >
The partnership will expand Junttan’s product line from primarily pile-driving equipment into foundation drilling equipment.>